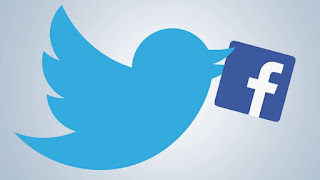 Go to google.com and then type “what is better” and then a series of suggested results will begin to pop-up like Android or iOS, AMD or Intel, LED or LCD, 4G or LTE and the list continues.
Apart from these questions, there was one more question that was often darting across the screen and that was what is better, Twitter or Facebook?
I know this is a tough question indeed and many tech savvy have tried to put their argument forward in this context. It’s Twitter Vs Facebook. Some have supported the former while the rests have supported the latter one.
And then I thought to pen down my views. Having spent few years on both of the social media I hereby have concluded on few points. The title of this article is not the verdict and the following views are completely mine, and have not been written down to hurt anybody’s sentiments. :D

1.       Retweet: when we see something catchy in our feed in Facebook, what we do the first and last thing is that we like the post and comment on it.  We don’t share it at the very first impression. And that is different in case of Twitter. People don’t show any type of hesitation in retweeting in comparison of sharing in Facebook.

2.       Follow:  in Facebook there are two kinds of people one are having simple profile in which you can send friend requests and the other one is in which you can like the page. But in Twitter everyone has same kind of profile. The only basic difference lies on the fact that whether you are verified or not.  Although the same thing was copied later by Facebook.

3.       Trending:  it gives you the quick glimpse of all the events going around the world. And one thing that is one of the most important about this feature is that nothing gets past the eyes of trending. It may be any derogatory statement made by any politician or any hike in the price of fuel. It immediately makes the public to react upon and eventually the topic begins to trend in the particular country and sometime worldwide.

4.       Lists:  Is it possible that you may get updates from very selective person and few pages on Facebook. It isn’t possible and lists feature gives an edge to Twitter over Facebook in this regard. You can make a list and can add members of your interests and then you will only see what you want to see in your screen.

6.       Immediate reaction: let’s take a recent example when a 7.9 intensity earthquake had hit the capital valley of Nepal. My parents called me to know about my well-being and also recited their horrific experience. They were not knowing about the epicenter nor was I. I searched it on Twitter and then it got flooded with the reactions. People from Kathmandu to Delhi were tweeting about the incident which gave me a rough idea about the incident and the areas where it had made its mark. The same incident was posted in Facebook too but there was a considerable delay.

7.       #Hashtag:  # is available on Facebook but it’s not used so intense as it is used in Twitter. Chris Messina is often credited for the use of hashtag for the first time on Twitter. Eventually Facebook copied it later. Using a hashtag you can get a plethora of info regarding any topic.

8.       More exposure: you get definitely get more exposure on Twitter. I had tweeted once about Camtasia and the verified account of the company had itself responded to the tweet. I also got opportunity to interact with many writers around the world and also with few CEOs.  I think that might never would have happened on Facebook. Most of the fortune 500 companies have their accounts on Twitter rather than Facebook.

9.       Remain alerted:  there are many influential person in this world and you would never want to be on the shore when the ship is in the storm. Twitter helps you to remain updated about your famous idols by their in built feature which allows you get instant message on your cell as soon as they tweet.

10.   Downtown of Diplomacy and sports:  Well most of the politicians are on Twitter than on Facebook. Also those politicians that have their account on both of the platforms tweet often rather than posts and that a fact that no one can deny. And in the recent years tweets from the eminent personalities have been driving the diplomacy.

Some of the famous tweets includes tweet from Andy Murray who had given his views on Scottish independence referendum. Another important tweet was from David Cameron when he tweeted about dementia in December. Some said that it was a tweet sent during a cabinet meeting and subsequently made history for being it first of kind. One of another interesting and controversial tweet was from Roger Federer when he had posted a pic of himself along with Indian Cricket team Jersey with the hashtag #BleedBlue (the color referred to the color of the t-shirt of the Indian cricket team). Roger Federer ran into problem as the cricket fans across the world begin to accuse him of being biased and were angry for supporting Indian team. Roger also gave a clarification on this regard later.

11.   Tweets has made newsmakers job an easy one:  Want to make an article on some of burning topics? Well it has become one of the easy tasks on web. The basic principle behind this theory is ‘the article will contain 25% content from them and the rest will be contributed by us’. They do write one paragraph about the incident and they flood the rest of the article with the tweets from the people from around the world.

12.   Special zone for special events: Do you remember how it was easy to get score of playing nation easily during ICC cricket world cup on Twitter. They had made a special timeline for that purpose so that fans couldn’t miss any moment of the matches. And IPL (Indian premier league) was no different. They made a special timeline again for the IPL. They moved step forward and launched a feature called ‘Missed call to follow IPL’.  This is the statement from the press release. “ Fans who give a missed call to IPL on 01130082008 will receive up to six tweets per day from @IPL that contain the hashtags #live as SMS  This service is free and make the IPL even more accessible for fans as they can get Twitter updates from IPL even without internet connection. “

13.    140 characters: The limitation on the characters is one of the reason of success of Twitter. It makes a tweet crisp and precise one. You write within your limits as well as see others tweet within that limits. That gives you an overview of voluminous topics in less time frame.

14.   Open in browser: I love this feature. It allows you to open any specific link within your application. And that page do appear without any ads and only content fills your screen. The similar feature is available with LinkedIn.

15.   Translate by BING: if a particular tweet in in any other language like Nepali or Chinese, you can still get the essence of the message/tweet by the translation feature of Twitter. Translate by Bing allows you to translate the message in yours language. Bing search engine is used for the purpose. However there are some limitations as the translation goes wrong for most of the time but it allows to get the basic underlying message.

16.   Do rivals talk? I don’t know about the behind the curtains scenario but they do talk on Twitter. Here are some instances.

a.       These Twitter conversations have really caught on with many Internet companies. We have seen Olacabs indulging in conversations with its recently acquired TaxiForSure frequently. Just recently, a man made a bizarre request to Olacabs about choosing drivers on the basis of religion, and Olacabs shut him up by saying that they do not discriminate on the basis of religion. This response fetched Olacabs accolades from rivals like EasyCabs and Uber on Twitter.
b.       Red Bull, apart from its beverage, is known for the Red Bull Tour Bus in the country promoting independent music. Amazon then sarcastically said that they weren’t equipped with wings like Red Bull, to which Red Bull with an image of Amazon’s flying drone said, “Who says you don’t have wings already?” Here’s how the conversation panned out.

c.       The latest comes from Amazon India and Zomato who interlocked on Twitter in witty word play. Amazon trying to promote its #AurDikhao campaign, tweeted at Zomato taking potshots on its frequent logo changes. Zomato cheekily replied by saying,”You should have seen the ones that didn’t make the cut” and attached an interesting image that showed Zomato aping the Amazon arrow pointing from A-Z. 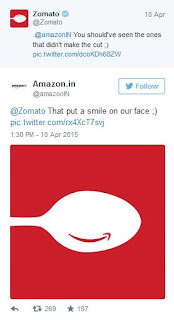 This was a neat marketing move from Amazon India’s digital marketing team. Even Zomato’s reply won the Internet, and Amazon again tried to one-up by embedding the arrow into Zomato’s new spoon logo. Amazon cheekily tweeted, “That put a smile on our face.” See the entire conversation below.

17.   Refine results:  when you search something on Facebook like Justin Bieber, it categorizes its search result under four sets People, Pages, Events and Groups. Nothing else. But in Twitter when you search Justin Bieber you can get sundry results and you can refine it too according to your choice. The engine is capable of showing only photos, news, videos, and comments from the people you follow or from the people near you or everything.