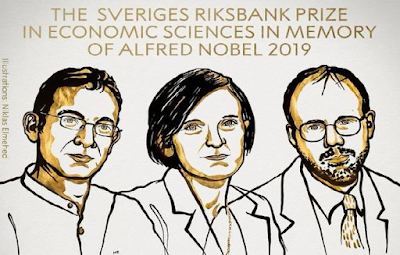 Esther Duflo and Abhijit Banerjee, MIT economists whose work has helped transform antipoverty research and relief efforts, have been named co-winners of the 2019 Sveriges Riksbank Prize in Economic Sciences in Memory of Alfred Nobel, along with another co-winner, Harvard University economist Michael Kremer.
This is a great moment for all of us as we all cherish and are congratulating the professor for such a remarkable achievement. Being from India, having studied from Presidency college, and having been to JNU gives you hope that an Indian student can go a long shot. I feel that it gives you the courage to dream for things never imagined or never attained before.

The couple talked to the media at an event organized by MIT, after the awards were declared. A very interesting question came from a gentleman which I wouldn't have dared to ask, given that I would have got the opportunity to attend that event. You may say fear of asking or something else but the question was as simple as it could get.

"What you did exactly?" asked the gentleman in his conclusion. You could hear a few giggling in the background.

Esther Dulfo took the opportunity and explained it in a very lucid and remarkable manner. That intrigued me to look more into the same, and here is the summary of the part of the work they undertook and which everyone should be familiar with.

Caution:  It’s a long article and feel anytime to skip.

In India, immunization services are offered free in public health facilities, but, despite rapid increases, the immunization rate remains low in some areas. According to the National Family Health Survey (NFHS-3), in India only 44% of children aged 1-2 years have received the basic package. That drops to 22% in rural Rajasthan, the setting of the present study, and was less than 2% in our study area (a disadvantaged population in rural Udaipur).

They were trying to understand the reason behind the immunization rate being so low in parts of India. Their work has been explained in a very lucid manner in the paper “Improving Immunization Coverage in Rural India: A Clustered Randomized Controlled Evaluation of Immunization Campaigns with and without Incentives” published on MIT website.

So, what was the problem?

1.     The immunization services were not reliable. Nurses and government officials were not discharging their duty consistently. You travel to vaccinate your child, you reach the PHC to find it closed and you return having the sense that it wasted significant time of yours.
2.     Immunization is something that is never on the top of the priority. Families are busy with many works, and if they don’t vaccinate their child this month, there’s always a chance to do the same in the next one. It’s not a kind of an emergency. The opportunity cost may be too high for the families, even if it’s low.
So, they teamed up with an NGO called Seva Mandi, and they asked the state government if they can replace them in certain areas of Rajasthan for providing the specific immunization services that the government machinery was already providing. 134 villages were randomly selected, and mentioned interventions were made to test the impact. This sort of trial is known as Randomized Control Trial in which you try to understand if one factor is affecting the other in a pre-conceptualised way or not. This was what Esther Duflo said. Though the Wikipedia page defines the same in a more systematic manner as "A randomized controlled trial is a type of scientific (often medical) experiment that aims to reduce certain sources of bias when testing the effectiveness of new treatments; this is accomplished by randomly allocating subjects to two or more groups, treating them differently, and then comparing them with respect to a measured response.

Intervention A: It focused on establishing regular availability of immunization schedule, which meant that attendance of the nurse and assistant were closely monitored. The timings and schedule were declared ahead; the mothers were educated on the importance/benefits of immunization. In short, all those works done by the pre-existing government machinery were being executed at a high level of efficiency.
Intervention B: It used the same infrastructure as Intervention A but in addition offered parents 1 kg of raw lentils per immunization administered and a set of thalis (metal plates used for meals) on completion of a child’s full immunization. The value of the lentils was about 40 rupees (about $1), equivalent to three quarters of one day’s wage, and the value of the thalis was about 75 rupees. Seva Mandir (It is a grassroots NGO based in Udaipur, in the Rajasthan state of India; works mainly in natural resource development and sustainability, village development, women empowerment, early childhood education, health care and welfare) decided to provide lentils, rather than cash, as this was useful to the family and also immediate had nutritional value. The amount roughly corresponds to the opportunity cost of time for the mother. The thalis were chosen as a tangible sign of achievement, while also being of immediate use.
134 villages were selected on a random basis. 30 of the 134 study villages were to receive intervention A and 30 to receive intervention B. The 74 remaining villages were control villages and received no additional intervention. 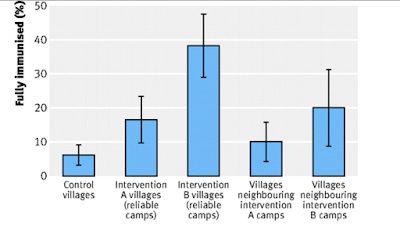 Costs: So which method would have been most costlier? Surprisingly, The average cost to Seva Mandir of fully immunising a child was $27.94 (1102 rupees, about £16 or €19) in the reliable camp with incentives and $55.83 (2202 rupees) in the reliable camp without incentives. The difference came from the fact that the camps had to be open from 11 am to 2 pm, regardless of the number of children present. Thus, the higher average number of children in the camps with incentives spread the daily fixed cost (mainly, the salary of the nurse and assistant) over more children. The marginal cost of an extra child being fully immunized with and without incentive in a given camp is, respectively, $6.60 and $1.30. The salaries of the nurse and assistant represented about half of the cost of the camp without incentives. When the same was calculated for the government, had they implemented the same interventions, the result were as follows: the average cost of fully immunizing a child was estimated at $25.18 in camps without incentives and $17.35 in camps with incentives.

On the intellectual side, she mentions that it helped them to understand how small incentives persuaded the general public to take decisions and their understanding of the public health care system. Now replicate the same experiment to different sets of people across 80 countries, and that's what more or less, J-Pal has been doing, which was founded in 2003 by Abhijit Banerjee, Esther Duflo, and Sendhil Mullainathan. As per wiki, J-PAL was established to support randomized evaluations measuring interventions against poverty on topics ranging from agriculture and health to governance and education. The Lab was renamed in honor of Sheikh Abdul Latif Jameel when his son, MIT alumnus Mohammed Abdul Latif Jameel, supported it with three major endowments in 2005.

Note: The work has been reproduced and restructured to make it more comprehensible. The paragraphs have been clipped from various sources, and there are strong chances that errors might have crept it. Apologies for the same in advance. Here are the references for the article.

Posted by Shashi Prakash at 5:07 PM No comments:

Google Maps and An issue with the same

Maps is really good. They have reached out to every single street on Earth perhaps and their strong team of Google guides who volunteer to add much information to each and every place has really made the Google maps an indispensable part and parcel of life. But, today I got at Versailles Chantier. I wanted to get to La defense and there was no train at all. Ironically the map was still showing the train schedule. It should be corrected and looked upon perhaps. Integration of the apps with the information furnished by the government agencies on a regular basis and in a short time interval. Also, I am talking about Paris, the most visited city in the world. The adoption of the same should definitely start from this place for sure.
Posted by Shashi Prakash at 12:11 PM No comments: