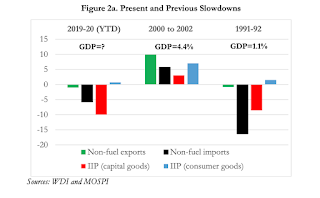 Arvind Subramanium has again been in the news with a very informative and well-explained paper of his name: “India’s Great Slowdown: What Happened? What’s the Way Out?”
We all have been talking about the slowdown at the behest of the parameters available in the public domain. But his recent paper co-authored with Josh Felman has been very elaborate on its way to mention the key factors lucidly and even pointing out the remedies possible.

This is no sustainable way forward with these rates and things will go worse before the situation gets better.

3.      Budget Deficit doesn't show the true picture: Restricting the deficit to 3.3 % is a healthy figure. It also shows that the economy can relax the percentage point upwards to boost the economy if the government wants so. But there is a problem. For better explanation, you may refer to this one: https://www.financialexpress.com/economy/under-reported-deficit-rise-in-non-capex-extra-budgetary-borrowings-raise-the-fear-of-a-debt-trap/1475171/

But the summary is that the real deficit may be up to 6-7 percent depicting that there is no space for increasing the budget deficit in the name of boosting the economy.

4.     Housing Sales: Considering the Top 8 cities (2019), the housing sales tuned up to 2 Lakh cr. But the unsold houses amounts to 8 lakh cr. That's terrible. The demand has been meager in the face of supply. The more worrisome fact is that a percentage of the loans sanctioned by the NBFCs and Banks to these Infra players are not going into building new estates but just to maintain the already existing inventory that they have.

5.     Electricity Generation (Growth percentage): It's even worse than the 1990 crisis falling to the meager 1 percentage point.

6.     Double Twin Balance Sheet challenge: With growth collapsing, India is now facing a Four Balance Sheet challenge—the original two sectors, plus NBFCs and real estate companies. In this situation, the standard remedies are no longer available. Monetary policy cannot revive the economy because the transmission mechanism is broken. Fiscal policy cannot be used because the financial system would have difficulty absorbing the large bond issues that stimulus would entail. The traditional structural reform agenda—land and labor market measures—will not address the current problems.

And these all come at that time when we have been quite lucky with the prices of Crude falling from $ 106 in 2014 to $ 61.11 per barrel as of 24th December 2019. Meanwhile, the RBI cut interest rates by a cumulative 135 basis points during 2019, more than any other central bank in the world over the period and one of the largest rate reductions in India’s history, in the hopes of reviving lending. But lending continues to decelerate, and investment remains mired in its slump

Nevertheless, the positive sides are that macroeconomics factors have been quite stable for the nation. We have healthy foreign exchange reserves. The data reached an all-time high of 413.0 USD bn in Oct 2019 and a record low of 1.1 USD bn in Jun 1991 (just for a perspective). This would mean that we have enough cushion to shrug off the exchange rate fluctuation that the economy may face. The inflation has been well contained in the limits.
The remedies suggested by the eminent scholar are these:
The fact remains that our Finance Minister has got a tough job. It may sound funny but when Mr. P Chidambaram on being asked by Rajdeep Sardesai, what would you do if you were Nirmala Sitharaman, he said "I would resign. If my assessment was so wrong, I would resign". All eyes are on Budget 2020-21 which may be presented by the minister on February 1.

For such articles in your inbox, subscribe here. And do let me know in case of any errors that may have crept in. Have a wonderful day.

Posted by Shashi Prakash at 10:16 PM No comments: