How do I speak like Mr. Shashi Tharoor? I know constant practice but can anyone help and make me a flowchart for it?

Mr Tharoor was born in 1956 in London. He has been schooled in the best institutions that our nation has to offer. He has been an avid reader. In an interview with Bijoy Bharathan, he has mentioned and I quote:

“During my school days, I had taken it upon myself to finish reading one book every day — cover to cover for an entire year. By the end of the year, I had read almost 365 books — not really fat books per se, but those that I could finish in a day. I knew what I was setting myself up for.”

I would also like to draw your attention towards one of the passages mentioned in his wiki page that clearly states his appetite for literature.

Tharoor began writing at the age of 6, and his first published story appeared in the Sunday edition of The Free Press Journal, in Mumbai at age 10. His World War II adventure novel Operation Bellows, inspired by the Biggles books, was serialised in the Junior Statesman starting a week before his 11th birthday.

He has worked for 3 decades at United Nations working in various departments and in different countries.

All of those things: his career, his writing appetite, his schooling, sums him up, his persona, his intelligence and of course his speaking skill.

Link: Here
Posted by Shashi Prakash at 10:02 PM No comments:

How would Shashi Tharoor say "I love you"?

Tharoor: You are exotic my lady. The way you shimmer into this ecclesiastical edifice, bedecked with jewellery, fragrant with attar of roses may even cuff Hebe. And your attire my dame. There ain’t another outfit on this pale blue dot that balances better the twin feminine urges to conceal and reveal. There is this fallacy that you ain’t going to be in cahoot with someone. But the myths have anecdotal accretions, almost all apocryphal. This distance now suffuses my heart, stifle my breathing and perhaps I can’t help my involuntary stride to you accentuated by the erratic speed of the celluloid. I have fallen for you my marquise, completely smitten. Forgive me for my effrontery and spunk but bluntly speaking my mademoiselle, je t'aime.

Note 1: He has used almost 75% of the exact words and lines in his works like Riot, The Great Indian Novel and The Five-Dollar smile.

Hope it helps.
Thanks.

Posted by Shashi Prakash at 9:58 PM No comments:

" What is the best book by Shashi Tharoor? Why?" 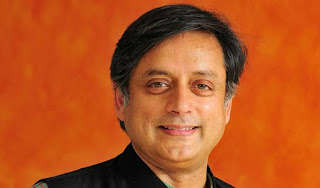 Since he writes Fiction and Non-fiction both, you have to pick out one out of the twos to do the justice to the question.
In total, he has written 16 books to date. His fictions include:
His Non-fictions include:
His best fiction book is ‘Riot’. I didn’t pick ‘The Great Indian Novel’ because it has got fundamentally inspired from The Mahabharata. Though the approach of redefining the method of retelling the greatest story this civilization has ever heard of, The Mahabharata is commendable to its every bit. Still, the credit for the plot can’t adhere to his writing capacity. But his book had got its own importance. Younger Indians do get fascinated about The Iliad & The Odyssey; Romans; Babylonians but they miss the story of their own country. They don’t feel ‘cool’ to talk about Bhishma or Karna as they feel about Brutus and Ceaser. Amidst of that, he piqued the interest of younger generation in The Mahabharata through his Novel. That surely is very admirable.
Riot is a great story about the murder of a girl in a riot. I wouldn’t talk much about the plot but it is one of the best novels that you can pick and you won’t regret. Though I feel Shashi Tharoor is very best in writing Non-Fictions as compared to fictions.
His best Non-fiction book is India: From Midnight to the Millennium and Beyond. President Bill Clinton himself had read the book while preparing for his visit to India in 2000.
‘When Tharoor gets down to India as a concrete personal experience, everything seems new and fresh.’ - New York Times on the book.
If you want to know more India, No one can better explain her better than Dr. Shashi Throor. That would summarize my take and views on his works.
Hope it helps.
Thanks.

Posted by Shashi Prakash at 3:27 AM No comments: