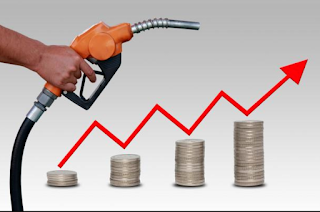 Indian Express mentions, "US oil markets created history on Monday when prices of West Texas Intermediate (WTI), the best quality of crude oil in the world, fell to “minus” $40.32 a barrel in New York. Not only is this the lowest crude oil price ever known — according to Bloomberg, the previous lowest was immediately after World War II — but also well below the zero mark."

"I am an investor or trader. I make my money by indulging myself in buying and selling stocks and commodities. In January, I thought that the prices of oil will rally in the coming months and hence I took a long position. A long position means I bought the contract at a specific price. This contract says that Shashi Prakash would buy WTI Oil from the other party (Let’s say Mr Shell) at $35/b and the delivery will be made in May 2020. So, what am I going to do with the delivery of oil? That’s the beauty of the game. In fact, I would not take the delivery and instead I would offset/exit/rollover my contract as per my gains/losses made in between these months. Why in heaven I need to buy those oil barrels? Here comes the month of April and May, and the oil prices never went up. In fact, I am in the red territory since the start of the game. Now I say to Mr. Shell, that look I can’t buy it right now; Just store it somewhere on my behalf and I would pay you the storage cost. But today is the last date else, those barrels would be delivered on my doorsteps. I ask Mr. Shell that please store it in your tankers for a time being. My Shell has no place to store up the oil in physical form as the tankers are already full. No one in the market is buying oil for the usage purpose like flights/shipments and all. Mr. Shell says, “Look, I can’t really hold up these oil barrels. These are your properties and you mind the same”. Now I will pay him again an amount, suppose $10 in order that he doesn’t deliver the item that I asked for.

Conclusion: You paid $100 to Amazon to deliver a product XYZ. Amazon is going to deliver it to you in 3 days. On the second day, you request Amazon not to deliver the product and you pay $40 again so that they entertain your request. Why so? Because It is less costly to pay $40 to Amazon and get rid of that product XYZ instead of storing it."

Let's switch to a few jargon and terminology now.

We are specifically talking about the WTI futures contract. WTI May futures contract which expires on Tuesday, requires future buyers to take delivery of the oil in Cushing.

1.     WTI: West Texas Intermediate (WTI), also known as Texas light sweet, is a grade of crude oil used as a benchmark in oil pricing. This grade is described as light crude oil because of its relatively low density, and sweet because of its low sulfur content. It is the underlying commodity of New York Mercantile Exchange's oil futures contracts. The price of WTI is often included in news reports on oil prices, alongside the price of Brent crude from the North Sea. Indian refiners say they prefer to continue purchasing oil at prices that are linked to the Brent. The reason behind the same being the inland movement and a long ocean voyage involved in buying American crude oil which narrows down the price difference to a point where it is not worthwhile. Also, it is about the gross refining margin (GRM). The GRM is the difference in dollars per barrel between the product revenue and the cost of raw material. It is one of the factors that represent the economics of a refinery. Bottom Line: Indian refineries will be a bit less affected by this news.

{Fun part: So this is not going to happen that you would go to petrol pump for the refill and after the same, you will ask the staff to give you money instead as the prices are in negative territory. :p Twitter India has been flooded with memes as well on this news.}

2.     Futures Contract: A futures contract is an agreement to buy or sell an asset at a future date at an agreed-upon price. Futures contracts are standardized agreements that typically trade on an exchange. One party agrees to buy a given quantity of securities or a commodity, and take delivery on a certain date.

3.     Cushing:  Cushing is a city in Payne County, Oklahoma, United States. It is a critical storage hub where the oil that trades on the U.S. futures market is delivered. With a capacity to hold 80 million barrels of oil, Cushing has only 21 million barrels of free storage left, according to Rystad Energy, or less than two days of American production. As recently as February, Cushing was not even up to 50 percent. Now, experts say it will be filled to the brim in May.

So, as I said that futures contract and that’s of May is going to expire on Tuesday have gone in negative territory. Given that there is little in any storage space available, people are ditching their contracts to avoid taking physical delivery. Instead, they are buying June dated contracts which is $23 a barrel.
Now, none of this is happening with the Brent Crude futures. Because delivery of the Brent crude can be made to a variety of locations around the globe, unlike WTI.
In simple terms, like Forbes, as reported, “the flexibility of the Brent futures contract means that lack of storage in one place isn't forcing traders to dump futures contracts in the way that it is with WTI futures”
Refineries are unwilling to turn oil into gasoline, diesel and other products because so there is no traveling happening. The airplane flights, international trade, shipments have slowed drastically and hence there is no demand. Oil is being already stored on barges. And the storage tanker companies are really on a high note because of this. Let’s justify the same with numbers. 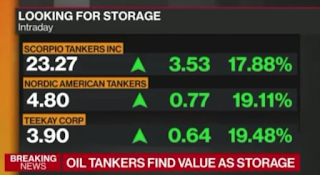 The world has an estimated storage capacity for 6.8 billion barrels, and nearly 60 percent is filled, according to energy experts. NYT reports, “Shutting down oil wells and then restarting them when demand returns can require expensive manpower and equipment. Fields do not always recover their former production. In addition, some oil companies keep pumping, even if they are losing money, in order to pay interest on their debts and stay alive. Halliburton, the giant provider of equipment, workers, and services to oil companies, on Monday reported a $1 billion loss in the first quarter, in contrast to net income of $152 million in the same period a year earlier”

Please go through these terms as well to understand the more exhaustive articles on this matter:

1. Contango is a situation where the futures price of a commodity is higher than the spot price. Contango usually occurs when an asset price is expected to rise over time. The premium above the current spot price for a particular expiration date is usually associated with the cost of carrying. The cost of carrying can include any costs the investor would need to pay to hold the asset over a period of time. With commodities, the cost of carrying generally includes storage costs and cost risks associated with obsolescence. The bottom line is that you have got long on the contract but you don’t want the physical delivery now. You ask the seller to keep it meanwhile and you would give him the cost of carrying.
2. Short Squeeze
3. Initial Margin Requirement
4. Mark to market
5. Backwardation
6. The trading arms are even tweaking their software to deal with these situations. In short, the programmers of those trading softwares had never expected the prices to end up in the negative territory.
7. The situation has raised because of Demand and supply mismatch. The cartel agreed to cut their production in the recent meet but it had been too late and the numbers had been too less perhaps. Read more articles on the same for reasoning.

Posted by Shashi Prakash at 9:12 PM