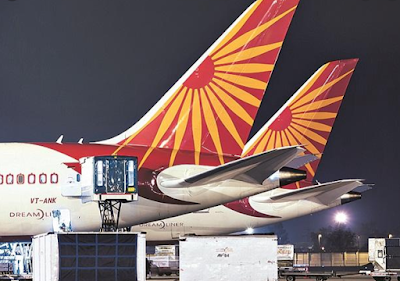 Before starting out the article, let us look at the estimated loss figures in the industry for the Q1 FY21[MOU1]

Not only the carriers but the entire value chain is going to be affected severely if we study the details of the issue.

If we talk about scheduled airlines then there are 7 players currently in India:

Air Deccan, Air Heritage will come under the regional airline header and hence we have not included them.  FYI: Air Deccan has become the first Indian aviation company to succumb to the COVID crisis that has paralyzed the sector.

Also, we need to know the number of carriers that each player do have:

The table shows the fleet size under the 'count' head along with the parent organization and the majority stake. In the last column, the market share of airlines is quoted under the 'share' head.

1.     Tata Sons: There has been a lot of talk in the sector that TATA need to choose either one in between Vistara and Air Asia India as the losses keep piling up. In FY19, the operating losses for Vistara were Rs 846 cr while for Air Asia’s India was Rs 703 cr. In the market share, Air Asia seems to have done things right while in terms of fleet size, Vistara has become relatively a large carrier.
2.     Jet Airways: In March 2019, Naresh Goyal gave up his 51% stake in the company. In April, the fuel suppliers refused to supply. In the same month, a plane operating flight 9W321 to Amsterdam was seized by another airline over nonpayment of fees. Jet airways went bust basically and currently has been dragged for the insolvency process. Overdue payments, debt summing up to Rs. 8000 crores, volatile oil prices, greater than sustainable discounts offered, inability to compete with other market dominators and many more contributed to the Jet crumble. One of the biggest reasons for its failure can also be traced back to its $500 million purchase of Sahara in April 2006 when financial experts advised against it. 16,000 jobs were lost because of the debacle.
But what happened to the 123 aircraft that were in Jet’s possession? 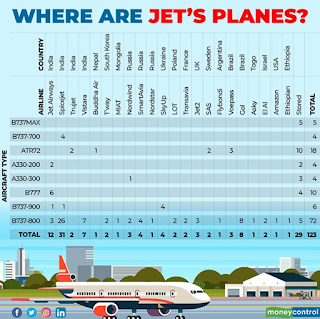 Answer:  12 remain with it while 29 are still stored, 40 are in India with Spicejet, Vistara and Trujet.

3.     Spice Jet: The company had substantial exposure to Boeing. Around 13 Boeing 737 Max needed to be grounded in the March 3rd week after the same plane was involved in the two plane crashes (Lion Air Flight 610 and Ethiopian Airlines flight 302)
4.     IndiGo:  It had placed an order of 300 Airbus aircraft in an estimated $33 billion deal. It would be interesting to check if the order size is revisited in coming months?
5.     Let’s visit this Bloomberg Report:

“Which airlines are most at risk? Like the virus, the crisis is indiscriminate, affecting everyone from budget operators to national flag carriers. Aircraft manufacturers and their suppliers also are under immense pressure, with Boeing Co. calling for billions of dollars in state support and Airbus SE extending credit lines and canceling its dividend. 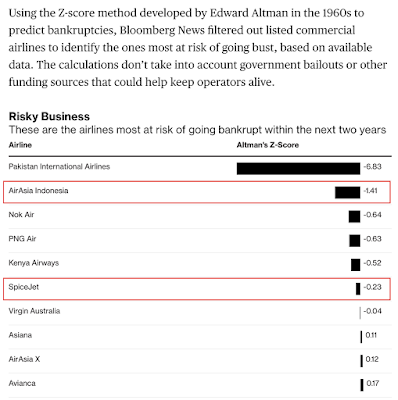 Remark: If the report is true, then the inclusion of SpiceJet and Air Asia Indonesia is not good news for the industry. Impact over any of the subsidiary held by Air Asia would be detrimental for the prospect of survival of Air Asia India as well. The unwillingness of Tata group as well in the JV would mean a perfect screenplay for the death of Air Asia India as a whole but meanwhile, let’s wait and watch.
6.     The delay in getting Aviation Turbine Fuel under the purview of GST. Aviation Turbine Fuel (ATF) in India has not yet been brought under the goods and services tax (GST) regime. The central government currently charges 11% (it was 14 percent initially) excise duty on ATF and state-level taxes can go as high as 30%. The cost for the same may go as high as 50 percent of the cost incurred by the airlines. ATF accounts for almost 40 percent of any airline's total expenditure. Therefore, any taxation on ATF always has a huge impact on airline companies. If the throughput charges levies. The official said that at the Delhi airport if the throughput charges levied by the airport operator is only Rs 100, the airline ends up paying Rs 164 as it is paying "tax on tax", which includes the goods and services tax (GST), excise duty and value-added tax (VAT).

7.     The new norms would may mean that the carriers would be operating at 1/3rd of their capacity and that would bring losses.

8.     “The revenue loss of the aviation industry spread across airlines, airports, and retail is estimated to be $1-1.5 billion per month of lockdown and about 70% of this will be borne by the airlines." as per CRISIL Ltd.

9.     Almost 50 percent of the current fleet that Indian Airlines do have, have been taken on lease. So that even while they are on the ground, the lease rentals are being paid.

As of now, there are 274 flights being operated under the ‘Lifeline Udan’ program by the Ministry of Civil Aviation. Air India, Alliance Air, and private carriers are the players in the government’s program. According to a statement released by the government, these flights have transported around 463.15 tons of supplies covering an aerial distance of over 2,73,275 km till date.

As we all wait for this epidemic to get over, we all need to keep 'watch and wait' mode for the time being.

Posted by Shashi Prakash at 1:37 AM