Is India going on for Trade War with Malaysia? 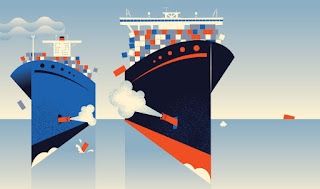 India is planning to widen curbs on palm oil from Malaysia to oil, gas and other products, news agency Reuters reported on Wednesday. India is the world’s biggest buyer of edible oils and has already effectively stopped importing palm oil from Malaysia by asking importers to look elsewhere. According to the report, New Delhi is now planning to restrict buying of petroleum, aluminum ingots, liquefied natural gas, computer parts and microprocessors from Malaysia. Meanwhile, another Reuters report said Malaysia will use diplomatic channels to try and resolve concerns over the palm oil exports.

World Economic Forum’s annual meeting for this FY at Davos is scheduled on 21st – 24th January 2020 and the sources have mentioned that Mr. Piyush Goyal, Minister of Railways and Commerce is not going to meet his Malaysian counterpart Darell Leiking

India imports 70 percent of its edible oils: soya, rapeseed, and palm. Palm oil leads the pack with a 40 percent share, of which 95 percent used to be imported from Malaysia and Indonesia. This once made India the largest destination for Malaysia’s refined palm oil.

India imported 24% of the same ie 4.4 mn tonne followed by China at 8 percent.

3 points to know about this hostility:

1.    Malaysia had joined Turkey and China in raising the Kashmir issue at the United Nations General Assembly (UNGA), with its Prime Minister Mahathir Mohamad accusing India of "invading and occupying the country" of Jammu and Kashmir.

2.    On the citizenship law too, Mr Mahathir commented labelling it as “grossly unfair”

3.    The government of India has also been unhappy with Malaysia's refusal to revoke permanent resident status for controversial Islamic preacher Zakir Naik, who has lived in Malaysia for about three years and faces charges of money laundering and hate speech in India.

Because of these reasons, India has announced the curbs on imports of refined palm oil on Jan 8. Though the official reasons stated for the same has been mentioned to help domestic refiners raise their plant utilization rates, according to industry officials familiar with the matter. In a typical year, India relies on imports for almost all of its supply of the veg oil used in everything from soap to cookies.

The reason for such a stand by the Malaysian PM on internal issues of India can be attributed to these reasons:

1. Mahatir is trying to outflank his opposition leader Anwar Ibrahim by playing the Islamic card. He has not just attacked India but also has said things about Israel- Palestine issue to gain that status in religious front.
2. Mahatir is of Indian origin. His father, Mohamad Iskandar, was a Penang Malay of partly Indian ancestry. Mahathir's paternal grandfather had come from South India and married a Malay woman. To counter his image of that kind, he has said the statement about India in the past too.
As of now, Mahathir commented that "We are too small to take retaliatory action," He told reporters in Langkawi, a resort island off the western coast of Malaysia. "We have to find ways and means to overcome that," he added. The experts have been of the belief that India is not going to

Though few have the view that the ban on imports of Malaysian palm oil might end up hurting those on the poverty line in India, by increasing the risk of food inflation. Though many have argued on the same by mentioning that Indonesia may fill up that shortfall and India will be unaffected by the tension. Indonesia, the world's biggest producer of palm oil, boasts lower production costs and has a bigger share of the market in many palm oil-consuming countries. It has also historically offered palm oil at cheaper prices than Malaysia, although recently Malaysian export prices have slumped below Indonesian rates as Indian buyers retreated from the market. Though it would be interesting to see further developments with Malaysia as well as the ASEAN nations.

Do subscribe to our newsletter to get these articles at length. You may also follow Team_Osmosis Instagram page for regular updates on economic and financial news.