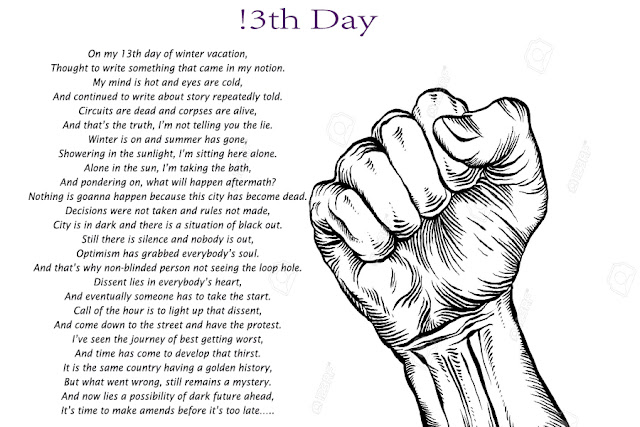 On my 13th day of winter vacation,
Thought to write something that came in my notion.
My mind is hot and eyes are cold,
And continued to write about story repeatedly told.
Circuits are dead and corpses are alive,
And that’s the truth, I’m not telling you the lie.
Winter is on and summer has gone,
Showering in the sunlight, I’m sitting here alone.
Alone in the sun, I’m taking the bath,
And pondering on, what will happen aftermath?
Nothing is goanna happen because this city has become dead.
Decisions were not taken and rules not made,
City is in dark and there is a situation of black out.
Still there is silence and nobody is out,
Optimism has grabbed everybody’s soul.
And that’s why non-blinded person not seeing the loop hole.
Dissent lies in everybody’s heart,
And eventually someone has to take the start.
Call of the hour is to light up that dissent,
And come down to the street and have the protest.
I’ve see the journey of best getting worst,
And time has come to develop that thirst.
It is the same country having a golden history,
But what went wrong, still remains a mystery.
And now lies a possibility of dark future ahead,
It’s time to make amends before its too late…..
Posted by Shashi Prakash at 11:07 PM

Email ThisBlogThis!Share to TwitterShare to FacebookShare to Pinterest
Labels: poem