Did Neil Armstrong landed on the moon? Are you serious! 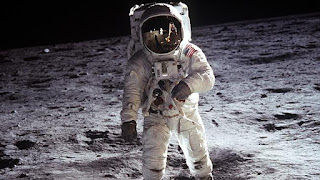 History has recorded the fact that Neil Armstrong and Edwin Aldrin were the first human to walk on the moon on July 20, 1969. But some people believe that the moon landing was a hoax carried out by NASA. They have studied the photographs and they are convinced that they are fake. Why do they say this? Here are some arguments in support of this theory.

1.       Thousands of pictures were taken by the astronauts and not a single one was blurred. This is quite unbelievable, considering the fact that the astronauts were wearing heavy gloves that would make handling a camera awkward. Moreover some of the still photos matches the film footage, though NASA claims that they were taken at the same time.

2.       We know that outer space is awash with deadly radiation from the sun. You will need a shield of at least 2 m thickness to be protected against this radiation. Yet the walls of the lunar module were only the thickness of a duty aluminum foil.

3.       We know that there is no atmosphere on the moon, and since there is no air, there can be no wind. Yet the American flag is shown fluttering in the wind.

5.       There was no delay in the answers that came from the astronauts to the questions asked by NASA. This again seems strange, because there is always delay even today when you are making a telephone call to another continent via satellite.


Thanks for reading. I hope that the content might have gone fine. Please don't forget to leave a comment. Your views and reviews always matter. :-)
Posted by Shashi Prakash at 10:08 AM