Review: "The Secret of the Nagas" by Amish 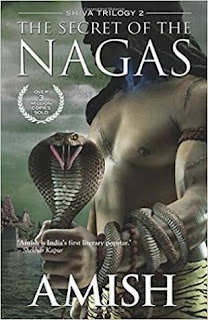 This is the second book in the series and just like the previous one, doesn’t disappoint you a bit. The characters are more vivid but there are too many characters. Sometimes you may need to flip pages behind or check the “List of characters” page to recall the person being talked about. Though that’s not an issue at all. The fiction unravels skin by skin as every chapter is consumed by the reader. It keeps you off the edge and doesn’t make it boring. Though there are certain grey areas where you may find yourself willing to skip pages. The compelling writing style dozes off sometimes but in a whole, it is as good as the first one. As Anil Dharker had mentioned and I quote “Furious action jumps off every page”. It is true to the verbatim to the most of extent. The incidents are written with detailing and have been paid attention just like the first one. The mythological characters have been introduced and given spin-offs to accommodate them in the storyline. For instance, Parshuram has been introduced in the latter pages but his history of parents has been penned completely different. Though in the text, he is an adamant follower of Shiva; does carry battleaxe resembling much to that of Sixth Avatar of Vishnu, Parashurama; have parents named Jamadagni and Renuka and similar few more attributes. But the character in the text has been given a slightly different history to match with the story line up. The prose is like the previous one. Many other issues have also been dealt in this book and they have been handled beautifully. Sati and Shiva do have interesting chemistry though there comes a moment when they have rough patches too.

Verdict: The second part is also as good as the first one. The story line up has been knitted very finely. Perfect pinch of masalas has been added to the recipe throughout the book and overall what you get is a satisfying repast. Amish does let you wonder what may have happened next and you surely crave for the rest of the story written in the 3rd part. So just go for this one too.


Will be completing the next part soon and will review it here itself.
Posted by Shashi Prakash at 7:15 AM