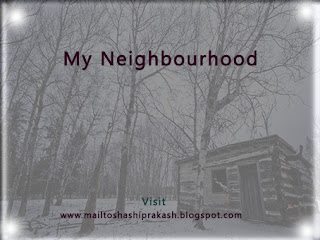 My neighbourhood is full of bright students. One was pursuing DM from International Medical University, Malaysia. His father had said hundreds of time that it was one of the most respectful professions of the medical field. Well, all guardians brag in the same manner when their son excel. I had still not given that sort of opportunity to my father.
One was in China doing a job in Zhengzhou Coal Mining Machinery Group CO. LTD... The other one was a teacher in the University of Dallas and was very well settled in America. And finally there was a local guy in my locality who was in India itself and that made me feel to fly to some foreign countries. In fact, he was a good guy but his achievement, and that’s too in my field of interest had embarrassed me. I was the victim of inferiority complex. He would quite often visit my house and as soon as he entered from the front door, I would exit myself from the back door. He was a strange guy. He loved to find errors and that’s too in every sort of thing.
“One who enjoys finding errors will then start creating errors to find”

My father would insist me to have a talk with him but I was reluctant. After preferring me a couple of foreign author books, he would wrap up saying, “Ho, jaega. “

I knew how easy it was for him to say that. He was in his final years and he used to have more than 0.4k likes on his DPs. He would never forget to put his location in any of his status. In his early years, he was so dumb.

He used to tag almost every of his friends including me. His location used to make me reluctant to like his pic. However, in his penultimate year he had uploaded a pic of mine with him and to my surprise, he had tagged only two of us. I was happy as that publicity stunt soared my likes within no time frame.
But still, I hated him.
Sometimes I would think that he was just like King Midas. But unlike his gold capability, Ankit Sharma had unique ability to crack every exam he even thought to attempt. Once in a life time, I had cleared the first level of Science Olympiad and had got an opportunity to go to the next level. However few months after when my father was telling Ankit my success story, he came up with his own. He had ranked 2nd in International Mathematics Olympiad and had even got an opportunity to visit Israel. I had never felt so small. I was jealous.
“Jealousy is rather an enjoyable emotion to watch”- Chetan Bhagat
My father never told my success story to any other after that incident.

“Prabhat Singh, 64
Shanker poddar, 56
Khitij sharma, fif……. “.
She began to adjust specs and my heart almost stopped beating literally.
“Fifty”
My Physics teacher gave me a dirty look. I don’t know why, but she hated me bad. I had come to know that some work of hers was delayed by my father’s office. And that was eventual. Well, she had tried to clear her file by saying that she was the teacher of the DMs son. And that statement didn’t go well with the concerned officers.
One day I saw Ankit walking through my school corridor and I just got startled. What the hell was he doing in this corridor leaving the other several ones? He began to approach my class room and I shrugged myself for not getting noticed through the door. I was on the first bench of the first column from the door. I had grabbed that seat so that I could see the girls crossing by. I was so damn wrong.
Finally, he had gone. Why had he come to our school?  He was an alumnus of our institution but he shouldn’t have come.
“Oh Ankit beta …”
Shit??? How he made it to our room. Over the few hundred rooms, he had got only ours to visit and that’s too in 6th period. The probability of such incident was even less than signal digit percentage but he had beaten the odds. Meanwhile, I thanked my Math’s teacher Verma mam as she had done a good job in probability.
I shrugged myself further.
“Guys, meet Ankit Sharma, one of the brightest student of our school.”
How she was able to remember his name so crystal clear.  She always stammered to call my name even when I was the humour imparting element of her class. There are always some guys favourite to some teachers and no matter whatever happens they are always made to stand up to answer a question followed by a huge round of laughter in the class. I was ‘THAT’ guy in her class.
“He is currently pursuing B-tech from IIT Roorkee and he was even the state topper of his batch”
I just wanted to kill that guy who had clapped from the back for Ankit Sharma. We had to follow the ritual. Many eyes of our classes had got lightened up after seeing him.
“Ok ma’m, I’m sorry for disturbing your class.”
“Yeah you should be faggot.” I said in my heart.
And finally, he winked at me before leaving that class. He may have slapped me or had beat me with his bare fists but that wink cost me more dearly. And finally, I heard the best sound in my ears.
(Ting Ting)

Back benchers surrounded me. The guys from the penultimate bench hovered to hear my call.
“Hey Kshitij, how do you know Ankit sir?” asked one of the students with very decent lunch box in his hand. I didn’t know his name in fact.
You see, how you garner reputation when you do something apart from the queue. And now they had started calling him ‘sir’.
“Let’s forget these things, guys. He is just my neighbour. “, I said as I tore apart the chakravyuh and went outside the class.
“He is so lucky!!!” said a guy as I was already out of their audibility range.
“Luckyyy…” I chuckled as I began to move down the stairs with hundreds of others students. ”

Email ThisBlogThis!Share to TwitterShare to FacebookShare to Pinterest
Labels: Stories