Review: "The Immortals of Meluha" by Amish 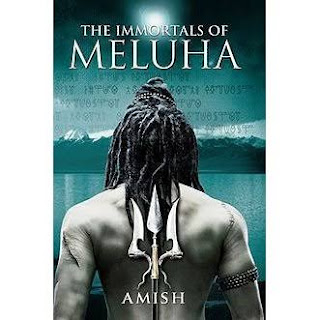 I wish I could tell you and convince you about how wonderful this book is!!!!!!!!
In short, It is just beautiful. The words are easy to comprehend. Prose is quite easy to understand and doesn’t challenge the literary knowledge of an individual.
The story revolves around Shiva who is a Tibetan immigrant to Meluha.

I will try to make it as simple as possible. Human civilization was not as great as it could have been. People were more selfish, and Lord Ram who was a Suryavanshi, tried to establish truth and justice. He even succeeded to some extent. Though Chandravanshi had evil intentions and they were trying to disturb the balance and harmony of the society. Lord Ram, being mortal, did as much as he could in his lifetime but couldn’t establish his ideals throughout and across the country. Though, the legend said that Neelkanth will carry on the unfinished task of Lord Ram. Neelkanth will transform all of India in line with the ideals of Meluha- a land of truth, duty and honour. His leadership can help suryavanshi end the Chandravanshi crisis once and for all. All the agonies will be over, and the unfinished task of Lord Rama would be completed by the chosen one. But how they will identify Neelkanth? According to Meluhan Legend, Neelkanth will be a foreigner. He cannot be Meluhan or from the Sapt-Sindhu. And that his throat will turn blue when he drinks the somras. Somras is a magical drink that allows human to live for centuries and more. Shiva drinks the somras under certain circumstances and the Meluhans come to know their Messiah.
The story also revolves around Sati, the daughter of the emperor of Meluha. Shiva or Neelkanth does fall in love with the lady. Their chemistry has been handled very well by the author. There is just the adequate amount of attention that the duo should receive and prevents the work from being called a book about love.
The book is not only about mythology but also addresses many other issues like untouchability, women empowerment, love, caste system and much more. Overall this book is a treat and repast for all the book readers and they are really going to enjoy this one. The initial pages may be bumpy, but the rest of the plot is as smooth as butter. It has got a compelling narrative style. Though the prose part is a bit less literature oriented but the story telling is much more commendable and that may compensate for the literature part.

The battle scenes have been written with detailing and attention. The warfare mechanism does remind of movie like Bahubali. Though the book was released earlier than the blockbuster. :D The next 2 books in the series were also well received, though I will try to let you all know my thoughts about those in recent weeks.

Verdict: Meanwhile, I may just advise that “Immortals of Meluha” is definitely a book that every shelf in the world deserves a place to be kept as of now.